John Taylor Williams, Jr., was born February 6, 1887, in Dayton, Campbell County, Kentucky. He was descended from Mary Todd Taylor, daughter of Colonel James Taylor and Ann Hubbard, through both his mother and father. He married Edith Belle Schofeld. They had three children, John Taylor III, Mary Elizabeth and Robert Lee. By 1920 they were living in Gooding, Idaho, and by 1940, Taylor, as he was called by everyone, had moved to Ketchum to work as a hunting and fishing guide for the newly started Sun Valley Resort. He lived in a cabin near Dollar Mountain called “Boar’s Nest”. He was reported to be the inventor of the Renegade fly. His nickname did not come from hunting bears, but from the shape of his own footprints. According to friends he was well read, witty and easy going. Also said by friends to be a hard-drinking, skirt-chaser (at this point he was a widower). Hemingway said of Taylor “we call him Colonel because he is from Kentucky but everybody thinks he is a British colonel because he looks like one who has been in India too long and is also deaf”. In the July 1951 issue of True, Hemingway wrote a piece entitled “The Shot”. In its leading paragraph he said of Taylor Williams “… who can kill you dead with a borrowed rifle at 300 yards!”

Hemingway first came to the Sun Valley Lodge on a complimentary invitation to stay in the deluxe suite. He was introduced to Taylor about 3 days later (September 23, 1939), and apparently they hit it off immediately. Before a duck shooting expedition to Silver Creek, Hemingway hinted that his gunnery might win him the necktie “the colonel” was wearing. It was hand embroidered with trout fly patterns. “The hell his gunnery might”, the colonel said “—that tie was a gift from a lady friend and he wasn’t getting it for money, marbles or chalk”.

Like any “old Kentucky colonel”, Taylor knew his bourbon whiskey. His first personal project on taking a job at Sun Valley as a guide was to plant a mint bed. “Taylor didn’t make a mint julep, he built a mint julep. Even if you were on your fourth – or fifth – Taylor didn’t yield to the temptation to sweeten your old drink with another hoot of bourbon. He washed and polished the glass and started from scratch.” Hemingway appreciated Taylor’s sportsmanship and juleps. According to an old friend, Tillie Arnold, he always had a mint bed some place. “We never did find out exactly where it was. He said that the mint would be better if it was grown on the grave of a Confederate soldier”. Tillie’s husband Lloyd wasn’t so sure that Taylor “hadn’t lifted one complete and moved it to Idaho”. From the book To Have and Have Another, but quotes from Tillie are from her book Hemingway in Sun Valley and Lloyd’s book High on the Wild with Hemingway. Later that fall the Arnolds and Taylor began reading 24 chapters of For Whom the Bell Tolls which Hemingway was there to work on. The books progress slowed in late November when bird hunting season started, and then Hemingway left for the season.

Taylor was invited to go to the Florida Keys and then over to Cuba to fish and left in early April and returned in the middle of June 1940. When Hemingway arrived back in September, he brought the final galley proofs of the books to the Arnolds’ shop to pack up, and they were sent off on October 10. The first editions arrived back. It is said by some that he was given a signed first edition, and by others an annotated galley proof.

During WWII the Resort was closed, and not much went on. When Lloyd Arnold returned in 1945 to help set up the resort, he learned from Taylor that his son Taylor (called Tay) was killed during WWII. He was apparently captured during the Battle of the Bulge, and was machine gunned down along with some other prisoners who were trying to escape. Then during the fall of 1947, Taylor got the news that his daughter Betty had passed away in Arizona. It was noted in one book that he told Lloyd that all he had left was one son and a grandchild. None of the combined efforts of Steve, Ray or I have turned up any records of a grandchild. After Taylor returned from the funeral, he was sent down to Key West to fish.

On February 6, 1957, his friends threw him a birthday party. The baker at the lodge made a cake with tiny, perfectly done bear tracks meandering between tiny pines, a blue sugar trout stream, small bits of something for sage, the trail so for-real that you looked for the little chocolate bruin that made it. Hemingway made a toast to “their 20th anniversary as friends”. There are some pictures on line at the Ketchum Library showing some of the party.

Twelve days later on Tuesday, February 17, Taylor had joined Lloyd at the staff table for breakfast, and was laughing and joking with everyone. He waved to them as he left. Suddenly Tillie shouted to Lloyd to come quick. An employee and a guest were carrying Taylor. The poor man was in agony, scarcely able to speak, sounding like a man half drowned. He was taken to the ambulance and passed at 1:00 a.m. February 18. His autopsy showed an atrophied stomach wall had ruptured upward, penetrating the lung cavity. Apparently very rare in medical history (at least at the time).

A quote from Taylor back in 1952 when attending the funeral of a popular ski instructor killed in an avalanche. “Finest country in the world to live in, but it’s hell to have to be buried in it in winter.” This portion from Lloyd Arnold’s book: “I guess my one “sin” while in service to the town was borrowing its equipment to take the place of a shovel gang”. He borrowed a Michigan loader that the town used for cleaning out intersections after the regular plow. “Opening a grave well out from easy access had never been done with a machine. The man handling the sale of the $25 plots buckled on his high overshoes to come along with his map for recording, quite vexed at our insistence on that one spot. Ours was quite the operation on the bright, snappy day, the snow a bit deeper than we thought, due to the sharply rising hill that piled it there on the lee side of the prevailing storm direction. As I was the only skiing man, I put on my skis and probed for what seemed eternity because we got slightly off the ‘key’, which was one of two small footstones, right beside the rotary’s cut. Hemingway had insisted on coming along to help in any way that he could, and he was one of the guiding-eye sidewalk superintendents, standing on the high fat tire of the stubby Michigan machine. When my long shovel handle finally hit the low stone wall about Gene’s (another friend of everyone involved) grave my hands and my feet were about to fall off. The snowfield looked like a cribbage board. Then the big rotary came in on an angle to miss the footstones (the operator could run it along a silk-walled tent and not touch a thread), backed out to open a high-banked clearing. It wasn’t pretty by any standards, but the turn-on-a-dime Michigan did the job in no time and high-heeled ladies’ pumps could get to the gravesite without much discomfort on the slumbering green grass practically free of snow. I got a welcome nip from a brandy flask, the town got back its gasoline.”

“The pallbearers were an earliest Idaho neighbor of his father, Mr. Hicks, in charge of Sun Valley motor transportation, old guide Jack Redden, George Saviers (the doctor), Forrest MacMullen, Lloyd Arnold and Ernest Hemingway—listed last because in his humility he thought that he intruded over much older friends. We buried the colonel on Saturday afternoon, February 21, a bright, almost balmy day in which our jackets were warm enough. The service was held at the Opera house, and for the attendance file-in they played Red River Valley. At the end of the service My Old Kentucky Home was played. Lloyd says that Hemingway leaned over and whispered in his ear that “the sermon a bit off for the colonel … but the lady on that organ, we owe her a rare coin”.

In that same portion of the cemetery Mary and Ernest Hemingway are buried next to Taylor, with Ernest’s oldest son Jack, next to him. Below Taylor are Tillie and Lloyd Arnold, and next to them Ernest’s younger son. They are all under the shade of two trees.
Jack Hemingway donated 480 acres to the Idaho Foundation for Parks & Lands in 1973, specifying that it be named for John Taylor “Bear Tracks” Williams. It is prized for it’s angling opportunities in the sagebrush desert. Fly fishing is catch and release only. There has been virtually no development since the donations. (From Speaking of Idaho Posts on Facebook)

As you can tell, I borrowed liberally from several sources including:
Tillie Arnold, Hemingway in Sun Valley
Lloyd Arnold, High on the Wild with Hemingway
Phillip Greene, To Have and Have Another
Larry E. Morris, Ernest Hemingway & Gary Cooper: An Enduring Friendship
David O’Neal, Princeton University Class of 1960, Drinking with Hemingway 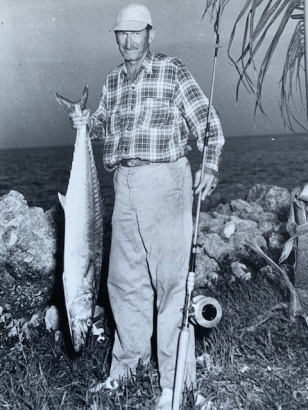 I found a picture of him with Ernest and Mary Hemingway taken in 1957 or 1958 in Cuba while the filming was happening for the Old Man & The Sea. Also have a picture (taken in front of Challenger Inn (another name for the Sun Valley Resort) of Taylor with a medal (can’t read inscription) and a trophy that says Concurso Hemingway, Eldorado Mayor 1957 where he looks about the same age as this picture. Hemingway started a billfishing tournament in Cuba in 1950. He won the first 3 contests, and Castro won the one in 1960, but I have been unable to find any information regarding any other winners (other than in much later years).

Tillie Arnold, Ernest Hemingway, Taylor Williams and Mary Hemingway, probably taken in the 1950s. I found many pictures in the books of Taylor and Hemingway together, and have several other 8 x 10 glossy photographs that were given to me. They may be copyrighted so I am hesitant to use them.

Gravesite in cemetery in Ketchum, Idaho. Mary and Ernest Hemingway are just to the right.
Because it is under the trees, it had a little bit of bird dropping on it that we cleaned off with some Kleenex I had in my pocket. 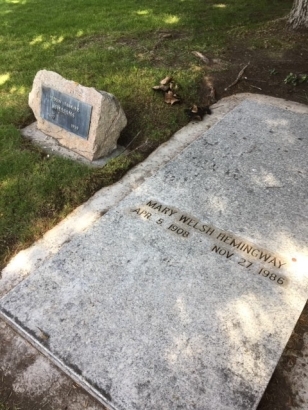 Their friend whose gravesite is mentioned in the article is just to the left and above Taylor’s gravestone. The Arnolds are buried just below and to the left in a plot that was given up by someone so that they could be buried there. Mr. Arnold was buried elsewhere, but moved in along with Tillie after she passed away and the plot was given to family members. We apparently were at the cemetery after Hemingway’s stone had been cleared. You can see one tiny bottle of alcohol and a few pennies on it, but our friends said they have been up there when it is completely covered with tiny mementos.